2014 marked the fifth 24 Hour Comic live drawing event which I have been a participant of.

This year was unique for me... this is the first time I was not an organizer for the event.  It was refreshing simply showing up to an arranged event and partaking.

As originator of the challenge, Scott McCloud has established rules for a comic to qualify:
It must be begun and completed within 24 consecutive hours.
Only one person may be directly involved in its creation, and it must span 24 pages.
The creator may gather research materials and drawing tools beforehand.
The artist may not plan the comic's plot ahead of time or put anything on paper before beginning.
Any breaks (for food, sleep, or any other purpose) are counted as part of the 24 hours.

Noteworthy:
If the cartoonist fails to finish the comic in 24 hours, there are two courses of action suggested:
Stop the comic at the 24-hour mark, or continue working until all 24 pages are done.
The former is known as "the Gaiman variation" after Neil Gaiman's unsuccessful attempt, and the latter is called "the Eastman variation" after Kevin Eastman's unsuccessful attempt.
Scott McCloud calls both of these "noble failures", which he will still list on his site as long as he believes that the creator intended to finish the project within the specified amount of time.

In my 24 Hour Comics, I generally do story based on Aric Thee Redd, whose appearance and costume changes every issue.  Twice I have successfully completed 24 pages in 24 Hours.  Once I continued the story past through at least 60 hours total (the second Aric Thee Redd... in which case there is an obvious difference between the work done during and after the challenge).  This year I stopped at 24 Hours, with a completed 19 pages.  Then, I added a 5 page secondary story so I could still print it at 24 pages.

Here is the finished product, being hosted by Paper Dream Production's Jay Sternitzky, who hosts this event. 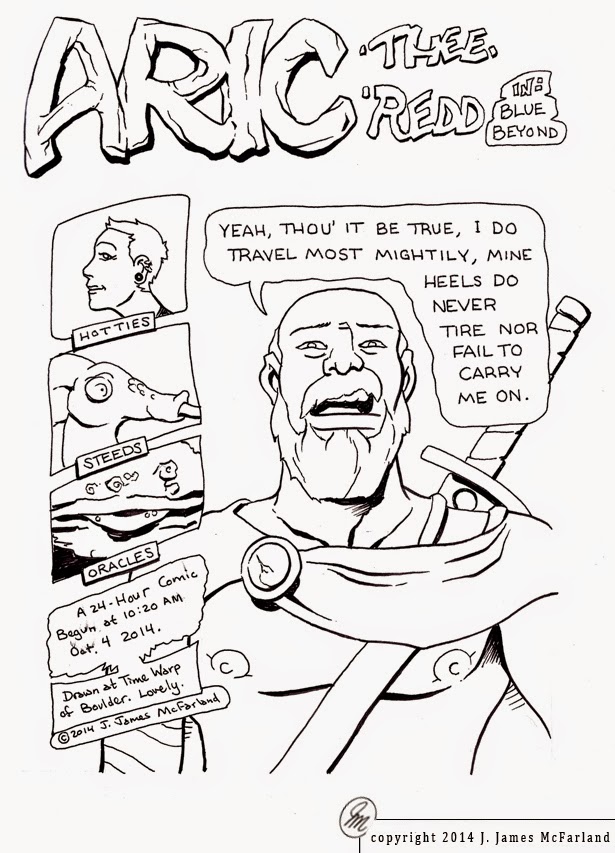