The Portland Zine Symposium was pretty fantastic all around for me this year.  There were a lot of good discussions, and my work was seen by a lot of people.  This is probably the most successful tabling event I have done from a marketing stance, as everyone who looked at my work was pretty strongly certain of what I had to offer and what it all was. 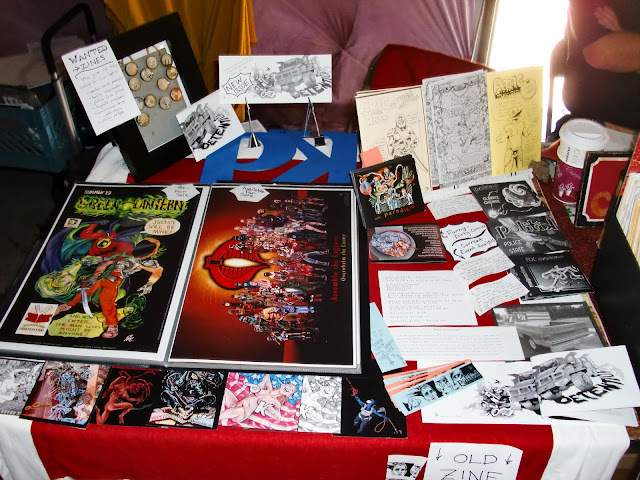 I was also able to show off a pretty good selection in a small space.  Previously, I used to layer EVERYTHING around a table including posters and big stuff.  This time I downgraded my actual carry ready portfolio into a look at all this stuff presenter, which was a big plus.  So I have that as a positive lesson learned.  There were something like 40 sheets of big pieces of art for people to look at and I think this model is going to be ideal moving forward. 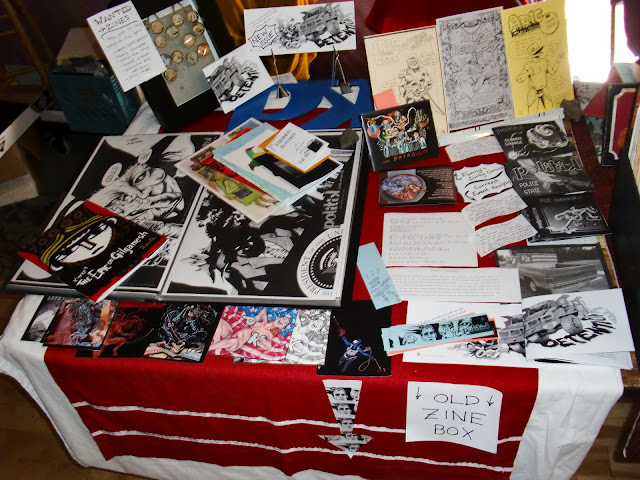 One thing I figured out that somebody should have said to me or I should have noticed years ago is that I make GREAT BIG pieces of artwork, then I make them itty bitty to fit them on affordable or cheap or efficient sized cards and such, and I really should be going more macro.  Another thing I learned is that that yes, sex sells.  I guess I knew that already but most events I don't put out any sexy lady drawings.  They aren't for everyone.  This event really liked them.

Also pictured above is a stack of other people's work I won by raffle on the right-hand page of my portfolio, and The Epic of Gilgamesh Part One by Kinoko.  I've tabled near her before one time but I can't remember where... it wasn't this event last year but it may have been at it two years ago.  Hard to say.  Anyway the wind kept blowing in through our wall, which was open and has trains going by, and she totally took charge a few times to keep it from being overwhelming by standing up for the tablers around her and shutting it several times... at two points during the show I was putting stones on the zines in front of me.  I like this location a lot but a plan has to be implemented for this door if it's used again.  The location is sweltering too, so for everyone person on our wall who wanted it closed so they wouldn't have to keep resetting their table and chasing business cards, there are three people who are like Mother of Pearl it's so hot. 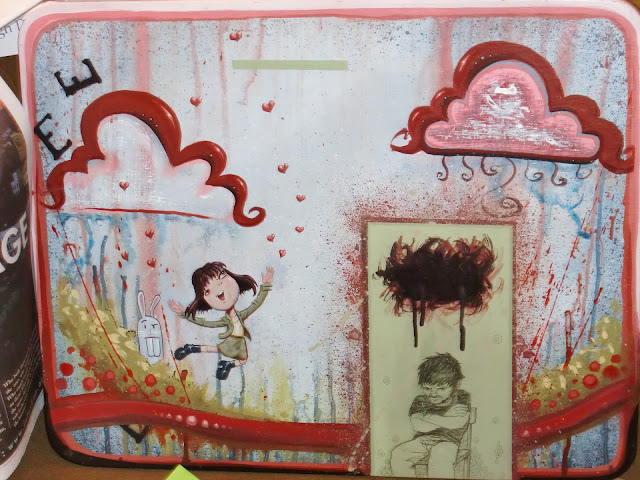 This is a piece I won by silent auction.  It basically sums up me and my wife.  It's great.  Not shown; the words love love love love love are like all over the blue sky.  There is no signature, unless it is the EE, and if it is there is not an EE that I could see in the program so let know if you recognize the art style.

Interestingly, I got to meet Jesse Reklaw whom is a pretty big name in the self publishing industry of Portland.  His first and middle name is the same as mine which I didn't know, and he has been self-publishing for 24 years, which I also didn't know.  I would not have put him above 35 so he either takes care of himself or he's been self publishing since he was like ten or something, at least I thought so when he said that.  Then I read the personal overview he wrote about self publishing called NYDI Now You Go Do It which pretty much says Yep, I've been doing this since I was like ten with an old copier at home.  So wow.  Didn't know that.  He's got book deals and he's going to stop self publishing because of that.  He's succeeded.   Also, he took his shirt off because of the heat and hollered a little, which was probably pretty good for bringing spectators by his table.  I may have to try that, right?  One girl fake cried loudly and dramatically at one point... bet her sales were good too. 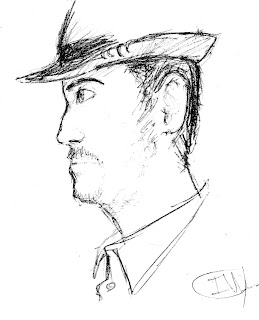 This is a piece I commissioned from a young artist named Ivy.  She was doing portraits.  This event has a lot of people who are artists, but maybe only 1/3 or less who really focus on it.  Lots of thinkers which is what holds the attraction for most, and the actual art of crafting is really important to a lot of people.  The goal I have set for myself is a clean, crisp, sharp professional look, but that does not hold much appeal for most of these folks, they are crafters and fine artists as much as illustrators.  Screenprinters, heavy inks, buttons, fabrics.  A scrapbooker or textile manipulator would do well. 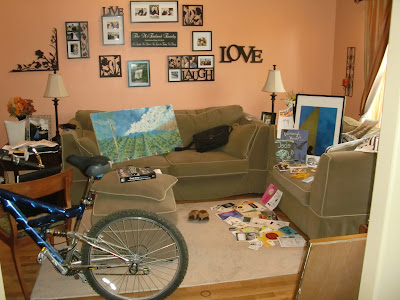 This is my swag pile.  Well, and my living room.  The swag pile shows off my new bike which I'm an idiot because I haven't ridden it yet.  I got it for almost nothing from good friends Amy and Aaron who were moving and giving stuff away to their friends.  They also gave out about 40 bottles of wine to their friends!  They were like Hey, here's some wine buddy.  You can't take it with you.  Also pictured is the only piece of art I did which is hanging in my house (except proofs of recent projects around my drawing table).  Traditionally, I have never put up any of my artwork in my house, just made it really weird.  Now that I'm decorating with someone else, my house is really weird.  It's a painting of my grandparent's apple orchard from the windo w of their barn, it's really old because I haven't oil painted in at least seven years.  The orchard is gone now, so it makes me sad to look at, but it's also a happy picture.  This is definately the most friendly place I've ever decorated... well, that's because I don't decorate much.  It's okay the way it is, very quiet, peaceful and zen sometimes.  I make probably a dozen pieces of art a month when I'm really going, or three major big ones if I'm on a "Project."  My life is full of Projects.  They're just not intended for living rooms.  We have a lot of houseguests and we like to entertain, come drink our wine.

Well, I gotta take that ride out tonight, huh?  I got two packages of Tofurkey from the Zine Symposium... I like it, I don't care what anybody thinks.  The organizers sent home dozens of loafs of bread and cartons of donated Tofurkey with the people who tabled.  They are very good at taking care of their tablers. 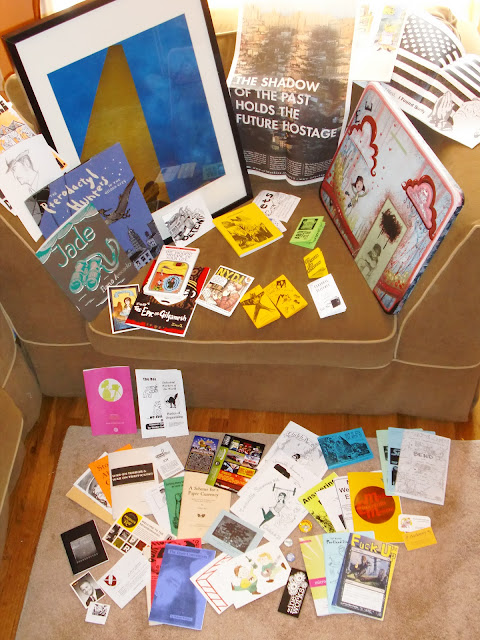 This is all that I managed to come away from the Zine Symposium with.  This would have to be considered my first really successful event.  I don't know how many I've done, but probably fifteen or so.  What I wanted to show off primarily was not the most interesting work to people, but that's okay.  I really like the framed painting I got in the upper left.  I'm not big on the monuments in Washington, they hold little contextual value to me.  Most of the people there were probably like "The Washington Monument, really?" but I think it's cool... see, you can't see the top of it, the triangle, so it's not showing a plinth type shape which I don't much like.  It looks a lot like a yellow carpet with blue walls in a narrow hallway, or a yellow brick road floating in the sky.  The top of the horizontal wall is just barely visible along the top side of the mat, so either the hallway is ending, or the it's "where the sidewalk ends."  Ha.  Shel Silverstein, along with Dr. Seuss, did create content primarily for adults from time to time.   I had a brief debate with a friend I've know for a long time at one point during this trip regarding whether they both had and just checked to see if it was one or the other or both.  Better right it down while I remember it.

Overall, very good stuff all around.  A friend of mine challenged me to look at my favorites, so I'll do that in the next few days.  I've always wanted to do short book reports on stuff other people make, so from time to time expect that here.  A mixture of art, current events, and hopefully inspirational stuff from time to time.  This blog will also be used to spotlight a variety of my pieces, because for at least five years I have been massively productive and especially so for the last two years, and almost no one has any idea of the scope of what I have done.

Oh, yeah.  Thank you to all the tablers and organizers who either gave me feedback, hooked me up, or helped me out.  Now I just need a person who can run my booth so I can go sit in panels all day!