This year we had set up a table for 21 people, outdoing the 19 people from two years ago.  That's just crazy to me, but some people think it's normal.

Spending time with a larger family allowed me to hang out with some of my youngest cousins.  Brothers Matthew and Zachary are recent converts to the clan of the Ninja Turtle fans, so we had a lot to talk about.

So this was an 11 x 17 bristol sheet out of my larger sketchbook.  India Ink and brush, I'd like to say it was an hour job but it may have been an hour and a half last night.  After spending so much time trying to explain graphic design and "selling yourself" to a wary and tryptopan besieged crowd, it was nice to just relax with Leonardo and Raphael.

This was actually kind of a portrait of Matt and Zach but don't tell them that!

(update):  So I've begun work on adapting this into a poster for some upcoming shows.  Definitely intend to show it at Rose City Comic-Con, and possibly as soon as Emerald City at the end of March.
Did a little "research" of the more modern version of the characters (that means I watched a few new cartoons) and found out that the kids won't know "my" Krang, but instead that they will know the "original" versions from the comics in the really early 80's.  That's cool, they're better than the goofy little guy from my childhood.  I never really liked that dude anyway. 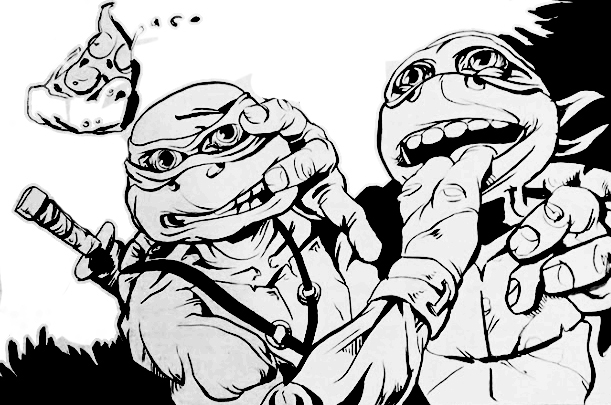