Here is a finished version of the print which I keep "teasing."  This is the version as it appeared when I began showing it at ECCC a month ago.

There will be some adjustments in color layout and shading, but it's pretty much what I envisioned when I started the process.  The concept was to portray the April character as a student herself, while pushing the brothers back into an observer stance.

I really like the fact that the brothers essentially should all look alike to an outside observer, and that they are really only discernibly different when garbed in opposing color schemes.  That said, I know which one is which in this print.  Hopefully anyone who really wants to figure it out can based on body language and skin tone colors.

UPDATE:  I have reworked this piece!  Check out the NEW version here, I really spent some time going over this piece to get it closer to my original idea. 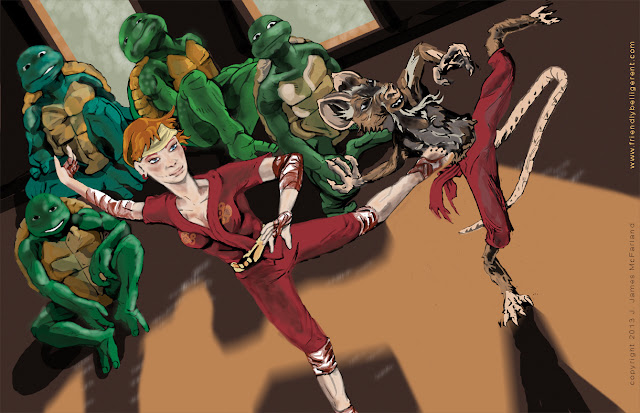