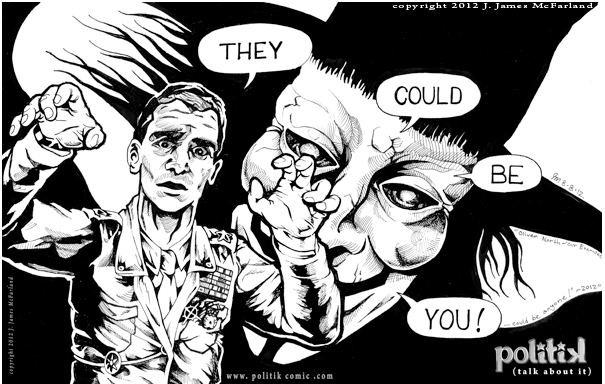 Extra worn out right now.  Just time to talk about this piece briefly.  This was one of my new thingies I trotted out for Rose City.

If you're old like I am, you'll remember Ollie North.  Finally somebody recognized him at Con which was pretty awesome!   Notable guesses included Andy Griffith and W Bush.

To call him controversial is an understatement.  To some, he's a hero who took the fall, to others, a war criminal.  Hmmmm.

Contrast that with V, who has a similar dual nature.  Terrorist, or freedom fighter.

One of my buddies directed me to the trailer of Call of Duty Black Ops, the videogame trailer.


"They could be anyone."  That scares the tar out of me.  It's meant to be scary.

So, that's were that imagery is derived from.  As soon as the video concluded I launched into the print.  If you can believe it, I actually made it something like a day before a family member's wedding in the bride's mom's basement with glittery black acrylic as my "india ink" and a variety of brushes and pens.  The original is 11x17.

I don't think people are scary.  Pretty much everybody I know is basically a down to earth, simple person.  Everybody wants to have the same comforts and securities in that deepest part of their cores.

Why the fear mongering?  It's not just one source which does it... everyone is supposed to be afraid of something.

Of all the wacky stuff  I've done that everybody raises their eyebrows over,  Paradigm is my favorite, because it really is closest to explaining my worldview.  Most of the time, I feel that I misrepresent my intentions by accident, due to poor focus.  Working on that.


Nobody wants to be told what to DO.  Well, unless they're banner waving partisan-apt people.

This is the cover to PolitiK: Paradigm.

It's actually originally a 3.5 by 3 foot watercolor heavy paper stock which I painted for the North Bank Artists Gallery in Vancouver Washington back before first moving to Portland and beginning my comic book study stuff there.

Now it's a nigh-postage stamp size cover to my little zine.  I think I'll try to make some as prints for the Jet City Con, in Seattle in a little under two weeks.  I'll be excited to see everyone who shows up there.